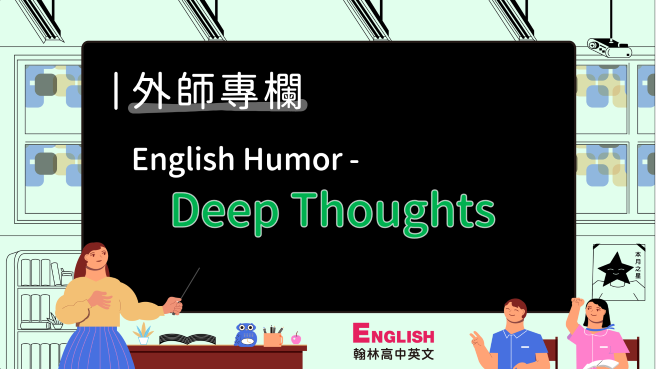 Jack Handey is probably not the most well-known name in comedy around the world, but he certainly has a special place in American pop culture. Handey is a humorist and absurdist writer and his Deep Thoughts (as well as writing for other sketch shows and his novels) have been a part of comedic legend for several decades now. Deep Thoughts have been a short feature of the comedy-variety show, Saturday Night Live, since 1991; the first appearance of Deep Thoughts was in the National Lampoon magazine in 1984, another standard of modern American comedy and the direct predecessor of SNL.

Deep Thoughts, as with example above, are usually short and presented as a sort of New Age wisdom with gentle music and pleasant landscapes. The humor plays on generally accepted wisdom or ideas, but then juxtaposes them with “outlandish hypothetical situations”. For example: “I can picture in my mind a world without war, a world without hate. And I can picture us attacking that world because they’d never expect it.”

The great thing about Deep Thoughts is that they are short and you can find many of them on YouTube, which include not only the text but also Jack Handey reading them as a voiceover. They are a short and simple tool for listening, reading and understanding English humor. (To be fair, some of them are pretty strange and some are definitely funnier than others.) Or you can check out another sketch series he created for SNL: Toonces the Driving Cat.

Click here for a listing of Deep Thoughts by Jack Handey: https://reurl.cc/9ZpMGd