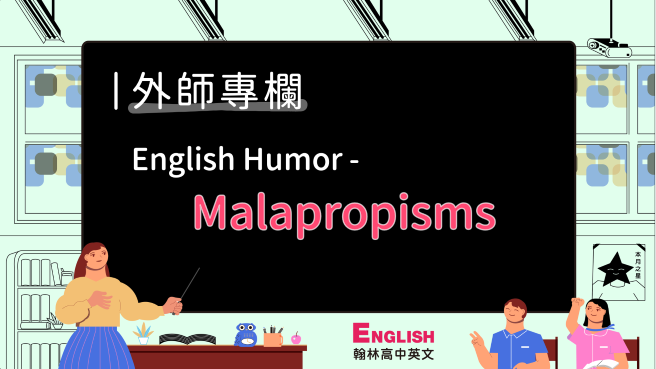 As with other aspects of English humor previously discussed, such as lexical ambiguity (#13), one major aspect of humor has to do with how malleable, fragile and confusing language can sometimes be. A malaprop is mistakenly using an incorrect word in place of a word that sounds similar, often resulting in a nonsensical but humorous statement. For example, former Texas governor Rick Perry once referred to states, such as Texas, as “lavatories of innovation and democracy.” This is pretty hilarious if you know that a lavatory is a bathroom or toilet; the word he should have used or meant to use was “laboratories” – a place equipped to carry out scientific research and experiments. (Makes much more sense, doesn’t it?)

The word malaprop comes from a 1775 play by Richard Sheridan called “The Rivals” and specifically from the character Miss Malaprop who has a regular habit of using wrong words that sound almost right. Her name, in fact, comes from the French phrase mal à propos, which literally means “poorly placed”. The malaprop existed before this play however and can be found in Shakespeare’s “Much Ado About Nothing” (1598), for example, and the first recorded use of malapropos dates back to 1630. As such, malapropisms are also called Dogberryisms for the character, Dogberry, from Shakespeare’s play.

“Jesus was well-known for healing the leopards.”

"She's as headstrong as an allegory on the banks of the Nile." (Miss Malaprop)

"[The speech] gave us a few well-frozen worms in praise of the society." (Ronnie Barker, comedian)

“[No one] is the suppository of all wisdom." (Tony Abbot, former Australian MP)

Finally, here’s a video from Merriam-Webster’s Dictionary, which provides an excellent explanation of malapropisms; it is best to watch the video with “closed captions” (CC) turned on as they have been written with complete punctuation and the video shows the correct word while the speaker says the incorrect word in his examples. Enjoy!

Merriam-Webster’s Ask the Editor – an explanation of malapropisms

Correct words for the above examples: