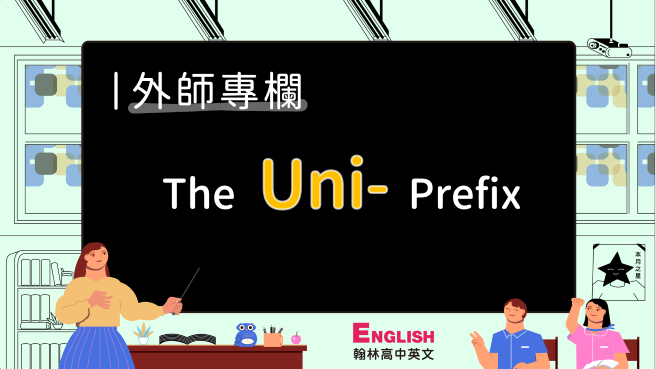 As bi- means “two”, uni- means “one”. A unicycle has one wheel. The mythical unicorn has a single horn protruding from its head. A military presents itself as one, unified force by wearing a uniform. And then, of course, we live within a singular, physical reality comprising space and time, which we call the universe. Like bi- and many others, the prefix comes from Latin, borrowed from the phrase universus, which means “turned into one”. Consider the following:

The above are just a few examples though you probably already know a few others, such as “united” from the United States of America, or that something that is one of a kind is “unique”. You may not even notice how often you see it; just think about it the next time you start a new unit of your English textbook. ;^)

(NOTE: Don’t get this prefix confused with un- as in unable, untied, or unintended. Quick tip, one begins with a “you” sound and the other with an “uh” sound.)